We’ve come a long way, baby! The main bathroom floor and the shower floor are done! Our handyman, The Greatest Handyman on Earth, came by to do it this morning. If you remember, I was going to do all the tile work myself, but then he showed me that our floor slants ever so slightly… which means I’d have had to level the floor out with the mortar (adding more mortar in the area that was lower), to create an even line.  (I could have not bothered leveling the floor, but then where the floor meets the shower wall and shower curb, the unneveness would have been visible and driven me nuts.)

Our handyman is extraordinarily patient with all my DIY dreams. He spent about twenty minutes instructing me on how to lay the mortar out and what corner of the floor to start in. He repeatedly said, “You can do it,” and even offered to swing by and do the first six pieces in the corner to get me started. I know my limitations. Taking Adderall these past five or so months has done wonders for my ability to follow through on things, to be patient, and to not make my usual careless mistakes. I have always worked really well when I get into a “flow.” But I realized that tile work is the exact kind of thing that I hate and am no good at: constantly stopping to measure, cut or trim, measure again. I’m ok with repetition. I’m not ok with repeatedly having to stop what I’m doing to make adjustments. Plus, I’ve gotten much busier in the past couple of weeks. When I looked at the impeccable job he’d done so far and thought about how long we’ve waited to get this bathroom done… well, I wanted everything to be perfect. I knew that if I did it, I’d mess up some small detail that no one would notice unless it was pointed out but would consume my thoughts for the next decade.

I am that person that obsesses over a picture being crooked by one millionth of an inch. In fact, last time we flew down to Santa Barbara, I spent the entire flight taking pictures of and staring at the fabric on the first-class divider a couple rows in front of me. (I really did! Look below!) The fact that the fabric was so poorly designed as to not be even, and that they USED this fabric that’s so clearly off-kilter, drove me mad for over two hours.

So yes. I decided that the best course of action was to just have the professional do it.

This was the old floor.

And the new floor, in progress:

Originally, I had my heart set on this large black hexagon tile with thin white grout lines. Then we’re doing white subway tile with thin, black grout lines for the shower. Husband was nervous about all those “lines” (black grout with the white floor grout), though I thought it would be fine. However, this was something I was willing to compromise on. I did NOT want to lose the shape of the hexagons in all the dark color, so I decided on thick grout lines to add “texture.” The tile spacers I bought are 3/16″. This tile is Adessi Opal Black Hexagon Porcelain. It’s matte black and each piece is 11×13 inches. For five boxes of this tile (to cover about forty-five square feet), it cost $145.

The shower floor cost about $70 for the Festival Black Hexagon Porcelain tile to cover about fifteen square feet. This is also hexagon tile but much smaller (the hexagon chips themselves are an inch), and it’s shiny. I went with black grout for these, too.

I am so glad that I made the decision to let a pro tile the floor. When he was done with it, I walked in to look and actually gasped.

The picture doesn’t do it justice—the lighting is odd because of the yellowish walls and the bright red from the waterproof Red Guard on the shower. It also needs to be properly cleaned yet, but it is beautiful in person. I love the matte black visual effect and the texture. I’m so pleased with how the thick lines turned out. The thick lines elegantly hold the shape of the tile against the dark grout. It is perfect.

And here! Ignore the nasty old wall stuff. He’d told us we could save the toilet, but I said I didn’t WANT to save the toilet. So I didn’t care when we “accidentally” cracked it when we tore the old floor tile out. (It was an accident, but maybe I just wasn’t being that careful.) I wanted a brand new toilet that used less water than the ancient thing that was here. So our new toilet has a capacity of 0.8 GPF. That’s LESS THAN ONE GALLON OF WATER per flush.

And, since we’re going all out: we’re going to install a bidet. Oh, yes we are. Do bidets sound silly and weird to you? I assure you, they are not. We’ll save money (on both the low GPF and not buying toilet paper very often), we’ll have fewer clogs (no more paper jams in old plumbing), and we’ll waste less paper (from simply not using toilet paper often). Bidets do not use much water, so they won’t negate that incredible 0.8GPF.

Here is the beast of a sink we wound up getting. I call it a beast because… well, look at it! We were limited in the width we could get, as we didn’t want it bumping into the towel warmer on the lefthand side. All I had in my head was “limit,” so I didn’t think about how big twenty-five inches would actually be. I also had wanted something that was narrower (didn’t stick out very far from the wall), but I loved the style of this sink and Husband wanted signficant ledge space. I purchased a black faucet (with cross knobs!) to go with it. I very specifically wanted a wall-mount sink, since we don’t need a ton of storage space or drawers. This is a CeraStyle 081000-U-One-Hole Yeni Klasik Rectangular Ceramic Wall-Mounted sink. (The description says it’s self-rimming, which… well, Husband I had more than one laugh over that.) For the size and heft of this sink, it was surprisingly well-priced at $200. I showed it to our handman before I purchased it, to make sure he could do this. It is HEAVY, so after looking at the specs, he opted to open up the wall and add some reinforcement. Once it arrived, I showed it to him again, because I was nervous about the size and weight. He didn’t seem concerned, only pleased that it arrived with the bolts and screws to hang it. Hurrah! However, I’m glad that he opened up the wall to reinforce for the sink, because since the wall was alread open, that’s why we went ahead and did the electrical for a hardwired towel warmer.

I AM SO FREAKIN’ EXCITED ABOUT THIS TOWEL WARMER! Can you tell? I was even more excited when I found out not only are we getting a towel warmer, but we get an actual on/off switch on the wall for it! It’s the little things, ya know?

That hole in the lower corner of the red wall is the electrical box to wire up the towel warmer. We can’t install it until after the tile work is complete. But holy crap, WE’RE GETTING A TOWEL WARMER! We had to choose the warmer ahead of time, so that he could wire it correctly. So the warmer we chose is a Heatgene Hot Towel Warmer in matte black. We did purchase a few things from Amazon so that we could use points to cut down on cost.

Next week, he’s coming to patch the walls and install the toilet and sink. Then we need to move on to choosing the subway tile. As long as we can be using the sink and the toilet, I’m ok with taking some time for the shower… though the bright red color is starting to drive me a little nuts. (Or not even so much the red, but the yellowish walls with patches of greenish cement board and the bright red on top of it all!)

The very, very last thing we’ll be doing is installing the shower door. After carefully planning so much of this bathroom, I really don’t want to skimp on the door. Shower doors, particularly frameless or the French shower doors that I’m eyeing up, are expensive—more expensive than all the supplies combined and more expensive than three days of labor. Yup. We’ll have to have one custom made, because this entire shower is custom built and not perfectly matching any standard door sizes. Plus, we have the shower buttress/half wall, so we’ll need something to go on top of that, in addition to a door that’s cut to fit the space we have. So the likeliest scenario is that we make do with a curtain for a few months, until we have the funds set aside to get a door we really want. After all this, there’s no point in rushing ahead and settling for less! 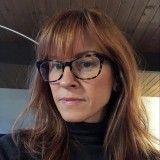 What White People Can Do Next: From Allyship to Coalition
by Emma Dabiri

Wow, No Thank You.
by Samantha Irby

My Sister, the Serial Killer
by Oyinkan Braithwaite